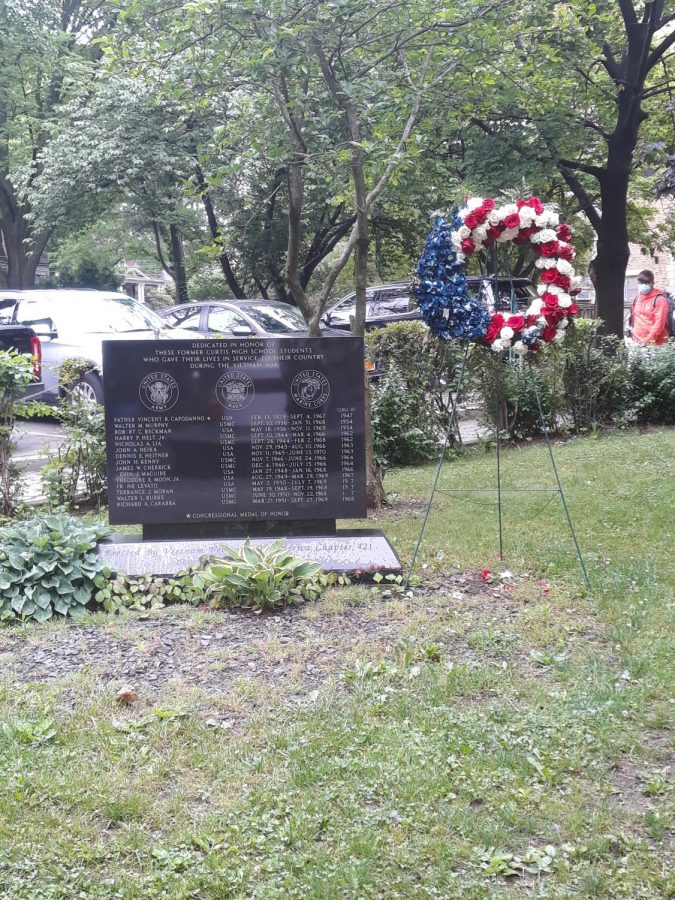 On May 28th, before the start of the four-day weekend ending with Memorial Day on Monday, the Navy Junior Reserve Officers Training Corps (NJROTC) at Curtis High School made sure to pay their respects with their own Memorial Day ceremony. Although it looked a little different this year to adhere to COVID-19 guidelines, it was still successful as ever in honoring Curtis alumni in the military and those who died fighting for this country.

The ceremony started with a procession towards the memorials of those who served and sacrificed themselves during the Pearl Harbor attack and the Vietnam War. At the front of the procession, members of the NJROTC held up a banner with the faces of Joseph F. Merell and Vincent R. Capodanno, posthumous recipients of the military’s highest award, the medal of honor.  After placing wreaths of flowers next to the monuments, they then hoisted the US flag high above them in honor of all those who had risked and lost their lives for their nation.

When we asked members of the NJROTC about the importance of this ceremony to themselves and the community, Abdullah Mehr, a senior, said, “It’s important because it commemorates the fallen heroes of Curtis and the sacrifices they made for everybody to have freedom.” Even though it was harder this year to plan the ceremony with the complications of different schedules, the NJROTC still faced it with remarkable resilience. As Michael Villa, the drillmaster, elaborated further, “Some people can’t show up just because they learn remotely. It’s hard but we gotta push through it.” Regardless of the obstacles, they carried out a phenomenal service.

After the first half of the ceremony, members of the NJROTC were celebrated for their achievements in the program and their plans going forward. Especially the seniors, who have had one of the most unusual final years to date. One of those seniors, Dennis Nguyen, appreciates his time in the NJROTC program as one of the best parts of his high school career. “NJROTC was basically my entire high school life, they helped me grow as a person from a freshman to a senior and I’m more confident, more responsible, and definitely more mature because of this program. And there’s no other program I’d pick in this school.” Despite the year’s hurdles, Abdullah Mehr, another senior, still looks forward to passing on his knowledge to the younger members of the program. “It’s interesting because since we’ve been here the longest, we have the most experience. Since they’ll be taking over soon, it’s going to be interesting to see what we can teach them to take forward.”

But as we go forward from this weekend, this ceremony is meant to remind us of the true meaning of this holiday and its significance to our nation. During his speech, Mr. Jaenicke also implored the audience to take this message home with them to remember our fallen troops who gave up their lives in the line of duty. “Undoubtedly, there’ll be some delicious barbecue to eat, some good discount sales to take advantage of, and recreational activities to enjoy. But in the spirit of Ubuntu, we ask you not to forget to take some time this weekend to solemnly reflect and appreciate the sacrifice of our fallen troops. And in particular, even my alumni and other members of the Curtis school community who died serving our country.”