Chicago is a 1920’s themed satire on the corruption of criminal justice cases and the glamorization of celebrity criminals. The play follows the lives and cases of Velma Kelly who murdered her husband and sister, and Roxanne “Roxie” Hart, who murdered her lover.

The actors were really good, the choreography and songs popped out at me and were well performed. Roxie, played by Savannah Mangin, played the role of a greedy and obnoxious wannabe movie star well. Velma, played by Jenna Muldoon, also played her role as a prideful 20’s celebrity with skill.

My favorite songs from the musical were “All That Jazz” and “Roxie.” When listening to the original track compared to the performance, the performance was on point. I would even go as far as to say that the choreography for “All That Jazz” was better than the one from the movie version of Chicago. The band really brought out the jazz in the musical numbers and overall, it was an amazing experience.

The sounds from the speakers were also easy to hear and not so loud that it hurt. The lighting was done well and brought out the actors and the set was beautifully crafted.

The set was composed of a stage on top of a stage with golden stairs leading up to the top platform and on the sides, there were doors with red curtains and lights to make up the outline. It looked like a grand stage from a nightclub.

The only criticism was that the transitions from each scene or from song to song were a little choppy. Otherwise, the show was beautiful and really entertaining. 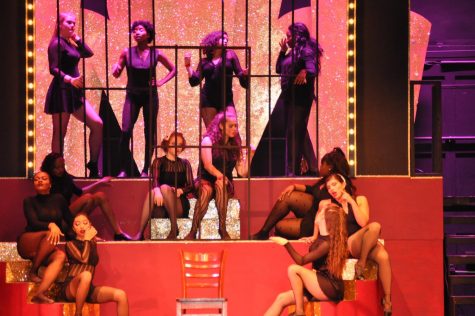